Helminths can cause a lot of suffering, but they can also powerfully protect against inflammatory disorders

The bad side: disease and suffering

Most people feel a deep-rooted disgust against worms, because creepy-crawly worm-like creatures stand for suffering, decay and death.

Effective anthelminthic drugs and improved hygiene have almost completely eradicated worm infections of humans in the industrialized countries. However, only 50 to hundred years ago, most people were infected with worms. From well-preserved corpses, a. o. Egyptian mummies or the “iceman” Ötzi, we know that in earlier times parasitic worms were stable companions of virtually everybody. 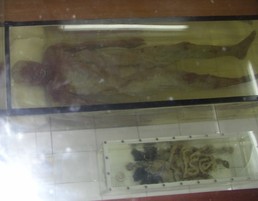 Well-preserved corpse of a high-ranking official buried more than 2000 years ago in Jiangling County, China.

His inner organs (below) harboured eggs from four helminth species. 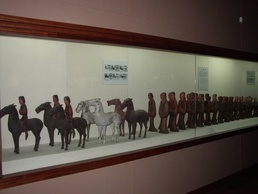 Small section of the burial gifts found in his tomb.

Thus, in ancient times even the rich and mighty had worms.

The good side: worms can inhibit inflammation

On the other side, parasitic worms can be engaged for improving health.
This seems paradoxical, however, helminths produce anti-inflammatory substances that may be utilized for treating asthma, allergies and autoimmune diseases.

This fact has coined our motto: Learn from the Worm! and is the basis of our second major focus, namely:

Global Schistosomiasis Alliance:
Danger is lurking in the water